By The Cruise Web, Inc.
Norwegian Cruise Line’s newest construction, Norwegian Encore, had her keel laid on November 28, 2018. The ship, constructed at the Meyer Werft shipyard in Germany, will debut in 2019 as the newest ship in Norwegian’s Breakaway Plus class.
Once the keel had been laid, Norwegian Cruise Line announced details on the ship’s entertainment and recreation in a unique way. Four performers from the Broadway musical, Kinky Boots, gave a surprise presentation of one of the musical’s iconic songs, “Land of Lola.” 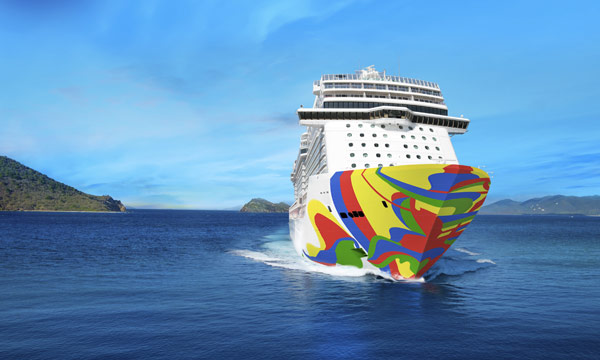 Norwegian hopes to provide the highest quality entertainment to their guests. President and CEO of Norwegian Cruise Line, Andy Stuart said after Wednesday’s presentation, “Today’s surprise ‘Kinky Boots’ performance showcases the evolution of the meaningful and unforgettable experiences we are dedicated to providing our guests. We are very excited to be the first to feature this award-winning musical at sea.”
Norwegian Encore will also include entertainment options that previously were exclusive to Norwegian Bliss, such as a Beatles cover band at the Cavern Club and “Happy Hour Prohibition: The Musical.” As far as recreation goes, Norwegian Encore is set to improve upon the cruise line’s signature go-kart track, expanding to two levels with turns that hang off the edge of the ship. For those with a little less daredevil in them, the Galaxy Pavilion will be a 10,000 square foot virtual reality experience featuring interactive gaming. Last but not least, there will be a new and improved open-air laser tag arena, modeled after the lost city of Atlantis.
As a Breakaway Plus class ship, Norwegian Encore will hold nearly 4,000 passengers on her week long journeys to the Eastern Caribbean. She will sail out of Miami for the first time on November 17, 2019.
To learn more about Norwegian Encore and her future voyages, please contact one of our expert cruise consultants today at 1-800-377-9383.