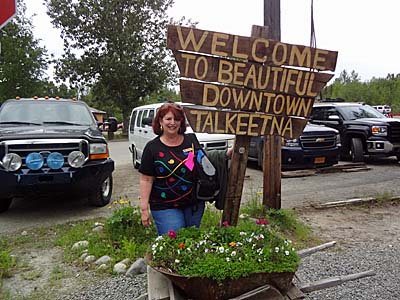 Several months ago I was offered the opportunity to join a group of travel agents from across the country to participate in a land tour of Alaska. As many of you may already know, certain cruise itineraries offer a land tour in addition to a cruise for a given amount of days, depending on location. When a land tour and a cruise combine this is called a cruisetour.
To be quite honest, when given the chance to travel, Alaska was never high on my list. I don’t consider myself an “outdoorsy” kind of person and the thought of trekking through wilderness did not sound ideal. I will tell you though, after this trip, my opinion has changed, and if you are one to enjoy beautiful scenery and majestic views you should definitely consider seeing Alaska and all of its beauty.
Getting  to Fairbanks 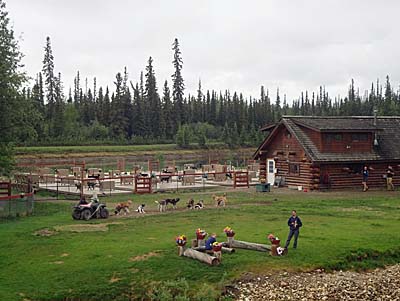 I set out on June 5th from Baltimore to Chicago where I connected with a flight to Fairbanks, arriving at 7:40 p.m. their time, or 12:40 a.m. on my time. Unbeknownst to me, there had been other agents on my same flight and we were met at the airport by a representative from Royal Caribbean who collected our bags and escorted us to a waiting shuttle for a short drive to our hotel for the night, Pike’s Waterfront Lodge on the Chena River. The hotel was a beautiful rustic lodge that was designed to replicate the look of a gold rush era establishment. After a brief introductory meeting with our tour leader, we went to have dinner. By the time we finished eating, it was already after 10 in the evening and it was still light outside. Fairbanks is just 188 miles south of the Arctic Circle so summer means more than 20 hours of light a day in June. In the morning, after breakfast and a tour of the property, we were taken by tour bus to board the Riverboat Discovery, an authentic Alaskan sternwheeler, for a fully narrated 3.5 hours tour along the Chena and Tanana River. Among the many highlights of this tour was the Iditarod dog kennel, run by the family of the late Iditarod champion Susan Butcher.
Denali 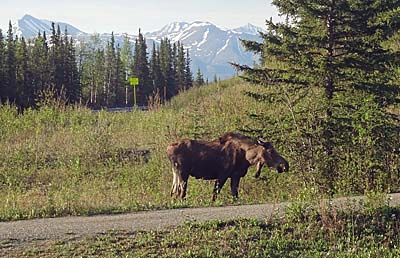 After lunch and a drive around Fairbanks we headed south by motorcoach for our next stop, Denali, where we toured the beautiful Grand Denali Lodge with beautiful views of the Denali Canyon before heading to our hotel for the night at the Denali Village Lodge along the Nenana River. It was on the road between these two hotels that we spotted our first moose grazing in the grass. Some of the people chose to go on some optional excursions that were offered for the evening (rafting, ATV-ing, flight-seeing) while I chose the more sedate but entertaining dinner and show, Music of Denali Dinner Theater. Our tour time for Denali National Park was at 6 a.m. so I didn’t make it a late night.
The morning was beautiful, sunny and clear as we headed off for our tour of Denali. It is said that only about 30 percent of the visitors to Alaska actually have the opportunity to see Mt. McKinley, as most of the lower 48 know it, or Denali, which is the correct name. Good fortune was with us this day as not only was the mountain visible to us, but we also got to see more moose, caribou and a grey wolf. The naturalist was very informative as he explained the terrain we traveled through, the tundra and tiaga.
Talkeetna 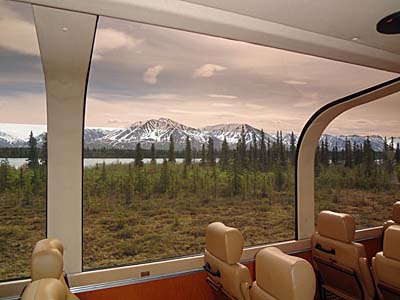 In the afternoon we boarded the Wilderness Express, the glass-domed train car for the scenic trip down to Talkeetna. The train was very comfortable with wide leather seats and gorgeous views. There is even an onboard host that provides narration throughout the trip. Downstairs was a lovely dining car and meals are prepared fresh by the onboard chef. Talkeetna itself is a small, quirky town which was the model for the old TV show Northern Exposure, and although the town itself is small there were loads of great restaurants and bars. The evening was spent at the Talkeetna Alaskan Lodge where if you are lucky you can view the entire Alaskan Mountain Range. Alas, luck was not with us this time as it was cloudy and sometimes raining. The vistas though were still magnificent and the lodge with its 46-foot river rock fireplace (see below) was a perfect place to sit and relax. Talkeetna also serves as the starting off point for the many Denali climbers.
Girdwood and Anchorage 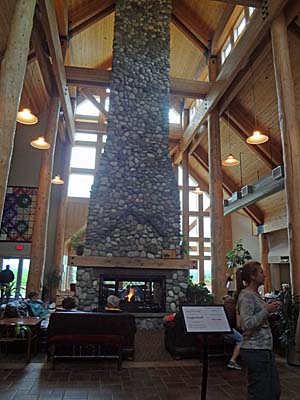 We left Talkeetna for the motorcoach drive continuing south to the next stop of Girdwood, a municipality about 36 miles from downtown Anchorage, and our hotel for the night, the Hotel Alyeska Resort, a AAA four diamond property at the base of Mt. Alyeska. The property is fantastic with year-round activities and breathtaking views. There is a tram that takes you 2,500 feet up the mountain where you can dine at the award-winning “Seven Glaciers” restaurant while taking in the panoramic views. The ride to Girdwood itself was one of the most beautiful I have ever experienced with the mountains on one side of the road and the glaciers of the Turnagain Arm off the Cook inlet on the other. From Girdwood we went to Anchorage, a larger city than I had expected with a population between 300-400 thousand people, and a mall in the city itself (with a Nordstrom!). We stayed at the Marriott Downtown Hotel, conveniently located within walking distance to shopping, dining and cultural sites. We had the opportunity to explore the Anchorage Museum which was also home to the hands-on children’s area, Imaginarium, and other fascinating exhibits. I wish we had more time here as there was so much to see. We did find some time to visit the Alaskan Cultural Center which offered examples of the various living accommodations of the different indigenous people of the region.
The next day was departure day; the days had flown by and were filled with activities and images that will stay with me forever. I would urge everyone who has ever considered going to Alaska to do so and to add the land package to your cruise. It is truly the best way to experience the best of the Last Frontier.