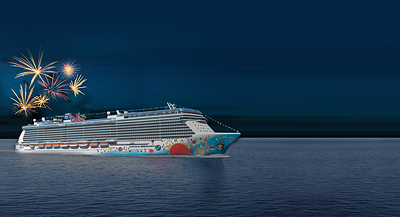 The Breakaway, Norwegian Cruise Line’s newest ship, will be introduced in New York this May with new features that are sure to make cruisers excited to sail. As the arrival of the ship gets closer, Norwegian continues to unveil new features for the ship. Two of the latest features of the Breakaway include an electrifying fireworks production as well as the addition of Carlo’s Bake Shop, which was made famous from TLC’s hit television series, Cake Boss. While you delight in some delicious baked goods, you will also have a chance to drop the pounds because the ship will feature a high-tech indoor cycling studio and Zumba classes for all. As another bonus, Norwegian Cruise Line is updating their excursions in Bermuda and adding exclusive opportunities for Norwegian guests.
Here is a quick rundown of each of these exciting features:

The innovative additions to the Breakaway will be introduced in the ship’s first departure out of New York in May, 2013. The new excursions offered for all Norwegian passengers will begin this year and Zumba classes will be offered on all Norwegian ships starting in the spring of 2013. The Breakaway will sail to the Bahamas, Bermuda, Southern Caribbean, and across the Atlantic Ocean throughout 2013 and 2014.
Make sure to contact The Cruise Web for more information on this ship and its itineraries.