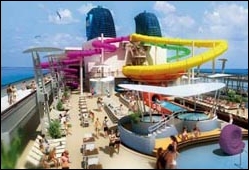 Cruising ship, Norwegian Epic, which will include an expansive Aqua Park with the only tube slide and largest bowl slide at sea — The Epic Plunge. The line also unveiled seven decks of Freestyle Family Fun with highlights including a 33-foot high, 64-foot wide extreme rock climbing wall and the first ever rappelling wall at sea; the most bowling lanes at sea with six in two venues; a mixed-use sports deck with the ability for guests to engage in eight different athletic activities; as well as three separate kids’ and teen activity areas and the first squash court at sea. In addition, Norwegian revealed the next generation of Freestyle Dining with 14 restaurant choices – the most at sea – and 18 bars and lounges.
Norwegian’s First Aqua Park
Norwegian Epic, set for delivery in late May 2010, takes Freestyle Family Fun to the extreme with an expansive Aqua Park that includes three water slides of varying thrill factors, including one specifically designed for children that zips straight through the rock climbing wall; a more adventurous slide twisting and turning down three stories; and The Epic Plunge, the only tube slide at sea that puts the blast of inner-tubing into the core of a bowl slide with a thrilling drop through a 200-foot long tube. Riders are then launched into the vortex of The Epic Plunge where centrifugal forces keep them high on the wall for several turns, ending in an exciting transition into a splashdown lane. The Aqua Park also includes two main pools with arching water effects which illuminate at night; five whirlpools; a wading pool and a kid’s pool in the children’s Splash and Play Zone which features whimsical sculptures, water sprays and effects, along with a kiddy slide.
Scaling New Heights in Freestyle Fun
In an industry first, Norwegian Epic will scale new heights with the first ever repelling wall at sea and a 33-foot high extreme rock climbing wall, accessible on two levels with varying degrees of difficulty, rated according to official U.S. climbing grades. Expanding its innovative concept of bowling at sea, Norwegian Epic will offer the most bowling lanes with a total of six located in two venues: Bliss Ultra Lounge and O’Sheehan’s Neighborhood Bar & Grill. The multi-use sports deck will include a full size basketball court, volleyball, soccer, dodge ball, batting cage, bungee trampoline, rope adventure course and a 24-foot tall enclosed climbing cage called the spider web. Norwegian Epic will also feature the first squash court at sea, located in the fitness center.
Largest Kid’s Crew Facility and Exclusive Teen Lounge
Recess is Norwegian Epic’s Kid’s Crew facility that is centrally located on Deck 14 adjacent and easily accessible to the family-friendly staterooms. Two separate areas are specifically designed for kids ages two through nine and tweens, ages 10 through 12. The Kid’s area includes a space-themed play area, air hockey table, an interactive light up dance floor; Wii” gaming areas; an arts and crafts area; along with a state-of-the-art surround sound cinema. The Tween Zone has a futuristic feel that includes multiple WiiTM and PlayStation® areas; along with a private karaoke performance stage which doubles as a cinema.
Entourage is Norwegian Epic’s high energy, exclusive teen zone for ages 13 through 17, located at the top of the ship on Deck 16. This funky space includes air hockey; pinball; foosball; a video jukebox; and nine large flat screen televisions, five of which are located around a central video game console featuring PlayStation® 3. In the evening, Entourage transitions into a hip nightclub with a space for dancing or just hanging out on comfy couches. Directly below is the video arcade which features number of the most challenging and interactive video games.
The Most Dining Choices at Sea
Norwegian Epic’s wide range of dining choices will wow even the most discerning cruiser with 14 Freestyle Dining restaurants and 18 bars and lounges. Each restaurant features unique and sensational culinary delights from around the world.
Norwegian Epic’s dining establishments will include:

Reminiscent of an elegant art deco supper club, The Manhattan Room features a dance floor as its focal point and will offer live music and dancing in the evening. The two-story high restaurant on Deck 6 features floor-to-ceiling panoramic windows looking aft. The cuisine reflects the elegant and romantic nature of the room.

Norwegian’s traditional American steakhouse takes on a new twist with the addition of Argentinean churrasco. In addition to mouth-watering steaks, guests will be able to sample a variety of skewered meats presented by tableside passadors. Another new addition is a large, centrally located salad bar.
La Cucina: This Tuscan-style eatery will serve regional Italian specialties including pizza, pasta and steak, chicken and fish dishes. The traditional Italian décor reflects two distinct areas: a Tuscan farm home and an Italian courtyard, where a large olive tree with hanging lanterns is the centerpiece, open to Café Jardin above.

Norwegian’s upscale bistro will serve classic French cuisine with an American flair. This elegant dining establishment surrounds guests with contemporary and traditional paintings and sculptures, making guests feel as if they were dining in an art museum.

This new addition to Norwegian’s specialty dining options will serve a delicious mix of Chinese dishes and noodle bar specialties. The décor reflects Old Shanghai in the 1930s and is reminiscent of the China Club in Hong Kong. There will be an open kitchen preparing traditional Chinese cuisine, noodles, wok fried dishes and dim sum.

This expansive sushi and sake bar will serve the freshest sushi, sashimi and Japanese Yakitori dishes. Featuring modern décor and clean lines, Wasabi is located outside the Teppanyaki restaurant.
Teppanyaki: As the largest Teppanyaki restaurant at sea with 115 seats, this expanded restaurant will feature up to 24 knife-wielding chefs cooking exhibition-style Japanese cuisine on flat top grills. Guests will be amazed by the masterful chefs who demonstrate their skills slicing and dicing while creating an appetizing meal.

This classic neighborhood sports bar and restaurant will serve American favorites and comfort food and is open 24 hours. The atrium’s two-story high screen will be visible from inside the restaurant and additional flat screen televisions will show sporting events, while guests enjoy their own activities, including three lanes of bowling, dart boards, pool tables, foosball and arcade games.

Located high atop the ship in The Villas complex, this modern and elegant restaurant is reserved exclusively for Norwegian Epic’s suite and villa guests. The décor reflects a private club ambiance with contemporary and modern furnishings, and a large wine display, dotted with glass sculptures and pearl drapes. The Courtyard Grill is the more casual, outdoor area of the restaurant serving Villas guests for breakfast and lunch.
To Be Announced: In addition to the above, there is also one more Norwegian Epic restaurant which will be announced at the next reveal in May. Also, 24-hour room service will be available for all guests on board Norwegian Epic.
Throughout the ship, there will also be a total of 18 bars and lounges, which include: Atrium Bar; O’Sheehan’s; Cascades, the casino bar; Bliss Ultra Lounge; Cagney’s Bar; the Ice Bar; Sake Bar; Malting’s Whiskey Bar; Shaker’s Martini Bar; Humidor Cigar Lounge; The Living Room, exclusively for The Studios’ guests; Waves Bar; Spice H20; the Epic Club; and Posh Beach Club. The final three bars will be announced in May.