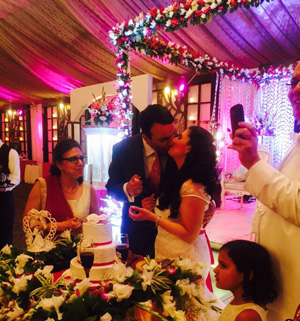 Congratulations to Fiona, Client Services Representative at The Cruise Web, who recently tied the knot with her longtime boyfriend, Cyrus. Fiona and Cyrus met on Facebook nine years ago while living in separate states—her in Utah, him in Maryland. Soon afterwards, Fiona took a vacation to Maryland. Little did she know, what was originally planned as a three-week vacation would actually turn into a permanent move. “Maryland quickly became home, and I just never used my return flight,” says Fiona.
Fiona and Cyrus agreed they wanted their wedding to follow traditional Parsi customs and take place in Karachi, Pakistan. “While it was difficult planning a wedding halfway around the world, it was all worth it in the end to have a big family-oriented wedding. Plus, I learned so much about my heritage and Parsi culture throughout the nine different ceremonies, with the three biggest ceremonies being the Engagement, Adarni and, of course, the wedding.”
After the wedding, the newlyweds flew to Singapore for a weeklong honeymoon. “We stayed in the Clarke Quay neighborhood, which is a really fun, kind of touristy part of town with a great nightlife.”
Upon returning to the office, Fiona was surprised with yet another wedding celebration, this time hosted by The Cruise Web. Fiona was certainly caught off guard by the party, but we hope it’s no surprise that we wish Fiona and Cyrus all the best!