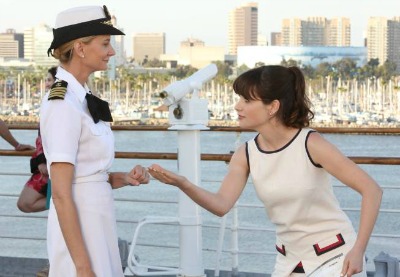 This week I was catching up on the season finales of some of my favorite TV shows, Grey’s Anatomy, The Mindy Project, Parks & Recreation and New Girl.
To my surprise, and kind of out of left field, New Girl decided to end their third season with the whole gang going on a cruise. Since I work at The Cruise Web, and have enjoyed several cruises, I was exciting to see how they would recreate the unique atmosphere of a cruise while putting their quirky mark on it.
I have to say that the episode was definitely absurd, and I won’t ruin it just yet, but the last five minutes of the show were very trippy. Back to cruising, a lot of what they showed made it seem like cruising hasn’t changed at all since the days of The Love Boat. Let’s go through and sort out what they got right, and what they got wrong. WARNING: SPOILERS GALORE.
1. In the beginning of the episode, Jess and Nick announce they couldn’t get out of their cruise reservations, so instead they were able to add four more beds to their suite, allowing everyone to join in on the cruise.  – FALSE!
While you can add third and fourth passengers to your room, you really can’t squeeze four more beds into a cabin. Some cruise lines offer deals where children sailing as 3rd and 4th guests can sail for free, but in most instances these passengers have to pay a discounted rate.
2. Once the gang gets on board, we see their wood-paneled “suite” stateroom with beds squished together. – FALSE!


I heard they shot this episode on the Cunard Line‘s retired Queen Mary, which is now a hotel in Long Beach, California. The Queen Mary sailed from 1936 to 1967, and cruise ships sailing today are much more modern, and even the deck space is different. Plus, rather than small porthole windows, a true suite will likely have a large window or balcony. Check out some of the images below to get an idea of a modern ship’s decor. 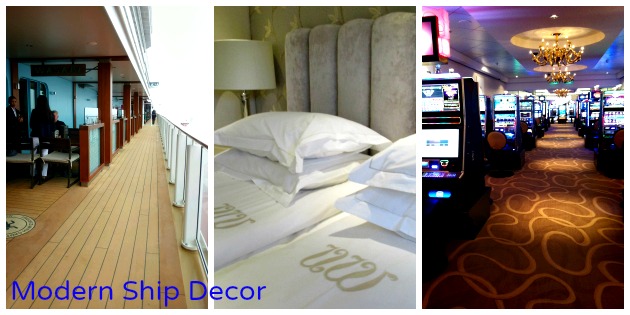 3. Then we get to the safety drill. Yes, every cruise requires a safety muster drill, but none will be as silly as the one on New Girl. When Coach volunteers to show the passengers how to safely exit in case of an emergency, he is placed in a tiny rowboat and given oars to paddle. – FALSE!

Cruise ship life boats are not tiny row boats, they are large vessels with covers and motors (and the muster drill does not require boarding one).
4. Jess and Nick are then seen doing a variety of activities onboard as part of their couples of package.  – This is RIGHT!

Cruise ships do have a variety of interesting activities. You can take yoga classes, or work out at the onboard gym. Most ships have spas and offer couples massages. You can also take enrichment classes, play mini golf, gamble at the casino and dance to a live band.
5. Towards the middle of the episode, Ce Ce is seen out on the deck trying to find a signal to connect to the Internet to make contact with her boyfriend. – This is RIGHT!
Cruise ships are now equipped with WiFi, but unfortunately it’s sometimes hard to get a signal. This is an issue that cruise ships are dealing with now, but they have made major strides in providing a more consistent and faster connection to the Internet.

SPOILER ALERT!!! DON’T READ IF YOU DON’T WANT TO KNOW HOW THE SEASON ENDS!!!

6. The episode takes a turn for the absurd when the gang gets trapped in their room for days. Each character seems to go crazy in their own little way. – FALSE!


When you are on a cruise ship, your stateroom attendant comes to your room a minimum of twice a day. In the morning they visit to make your bed and tidy the room. At night they come to deliver your daily schedule for the next day, turn your bed down, and sometimes make a cheery towel animal.
So they got a few aspects of cruise life right, but ultimately the cruise that Nick, Jess, Schmidt, Ce Ce, Winston and Coach went on was absurdly funny and just barely based on reality. Remember, you can watch the show and judge for yourself, it airs Tuesdays on FOX.

What did you think of the episode? Does it make you want to cruise? 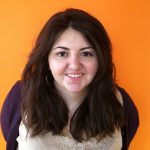