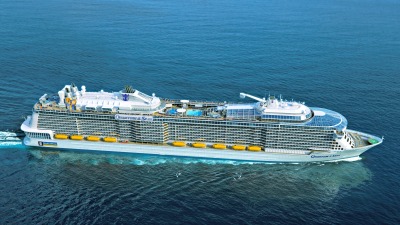 What you thought about dining on a cruise ship has been turned on its head with this month’s announcement by Royal Caribbean that they are not going to offer a traditional dining option on their newest ships, the Quantum of the Seas and Anthem of the Seas.
This is a new concept they are trying out called Dynamic Dining, which they see as the future of cruise ship dining. Here’s how it will work: instead of one or two complimentary dining rooms on the ship, there are five. Each of these restaurants offers something a little different. Passengers can make reservations to eat at these restaurants at any time for dinner. There are also specialty restaurants that come with a fee and casual dining establishments where you can find a quick snack.
Let’s break down the five complimentary restaurants and give you an idea of their menus. Then we’ll explore the new specialty dining concepts and celebrity chefs that will be adding their culinary touch to Dynamic Dining.

To help fulfill this new vision of dining, Royal Caribbean enlisted the help of three well-known chefs to create exciting and innovative meals. The biggest name amongst them is Jamie Oliver who is bringing his successful restaurant, Jamie’s Italian, onboard. In a statement released by Royal Caribbean, Oliver said, “Royal Caribbean shares my approach to food and dining, which is to serve simple, fresh ingredients in a warm, inviting ambiance. I couldn’t be more excited to bring my love of Italian cooking to their guests.”
See what he has to say in this video:

Oliver is known for his boyish charm and for advocating making healthy and fresh meals as easy as grabbing a burger at a chain. This restaurant will feature a wide variety of pasta dishes like Honeycomb Cannelloni Three Ways and Tagliatelle Bolognese. There will also be Lamb Lollipops and Jamie’s Italian Signature Porchetta. The price for a night at Jamie’s Italian will be announced in May, so check back to find out more details.
Another acclaimed chef, Michael Schwartz, a James Beard award winner, is opening a casual pub concept on the Quantum Class ships. Schwartz has worked with Royal Caribbean before and is the chef behind the farm-to-table cuisine at the 150 Central Park restaurant on the Oasis Class ships. Michael’s Genuine Pub will be open for lunch and dinner and have an a la carte menu that features Crispy Pig Ears, Falafel, Country Pate and assortments of meat and cheeses. There is also an extensive list of craft beers and a bourbon flight.
Devinly Decadence is a new dining venue at the Solarium, where chef Devin Alexander has created a menu of healthy snack foods. Alexander is the chef on the NBC hit show The Biggest Loser, and she brings a healthy approach to everyone’s favorite meals. At the Solarium Cafe you might find dishes like Ahi Tacos, Greek Nachos, Chocolate Chip Pancakes and other deceptively healthy selections. While breakfast is complimentary, dinner and lunch will have a small charge to be announced in May.

Rounding out this blend of complimentary and specialty dining are a few classics like Johnny Rocket’s, the Windjammer Marketplace and Sorrento’s, but there are new restaurants too. Most notably there is a new restaurant called Wonderland that promises to be just that for your palate. Wonderland is similar to Qsine, the innovative and imaginative restaurant on Celebrity Cruises‘ ships. Wonderland offers sharable food presented in creative ways with dried ice and a menu broken down by elements like Earth, Fire, Ice and Dreams. Dishes include Gazpacho Cones, Duck Liver Beignet and Liquid Lobster.
Get an idea for Wonderland by watching this video:

The SeaPlex Dog House is a food truck at sea, the first of its kind. This food truck is stationed at the SeaPlex, a multi-use area where you can roller skate or play bumper cars, and will serve gourmet hot dogs. This is a complimentary restaurant that’s open for lunch and dinner.
The Two70 Cafe will feature fresh pressed sandwiches, soups and salads. The cafe is located at the amazing Two70 Lounge which is low key by day and sparkles at night with amazing aerial shows and a video screen backdrop.
More details are still set to be announced, including the introduction of the new reservation system so you can make plans to eat at all the restaurants you want to experience — even before you get on the ship.
Does Dynamic Dining sound right up your alley or will you miss traditional dining where you have the same waiter and sit with the same group of people each night? We want to hear your thoughts on this big change in cruise line dining. Leave a comment!