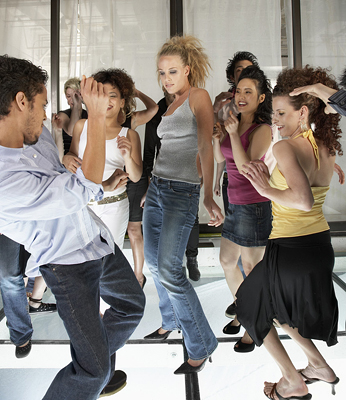 Even the most uncoordinated, non-flexible person can break out of their everyday routine to bust a move. With all the fun you’ll have on a cruise, you’re bound to let those inhibitions down – just imagine the sounds of that awesome band and one or two piña coladas. That’s right, we’re here to tell you that eventually the rhythm is gonna get you. Not only because of the fun you’re having, but because music and dance is almost everywhere you turn. Check out the different venues and events that offer you a chance to get your groove on, onboard and off.
Onboard Classes/Services
Whether you are looking to brush up on your skills or need a partner, most cruise lines have some version of dance classes during the day and certain cruise lines offer dance hosts for those tangos that take two.

Onboard Performances
Dance can be found on almost every show on every cruise ship. From the cabarets and revues of the luxury lines to the big Broadway-style productions of the contemporary lines, you’ll find professional performers singing and dancing for your enjoyment. These shows might even give you some inspiration for the next time you step onto the dance floor.

No matter which cruise you take, you’ll always find a space to let loose. Whether it’s at the clubs of the bigger ships (like Blaze on Oasis of the Seas or Liquid Nightclub on the Carnival Breeze), outside at a deck dance party or even slinking around in the piano bar, you’ll have an outlet to get your body moving.