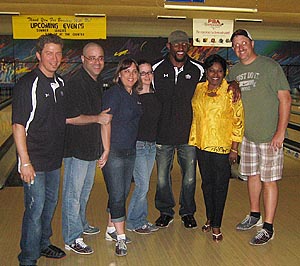 This month, some of The Cruise Web consultants and staff got a chance to play with Ray Lewis, the famed Baltimore Ravens linebacker, at his annual fundraising event:  Ray’s Summer Days. The event is actually a weekend’s worth of fun activities that help raise money for the Ray Lewis Family Foundation, which seeks to provide personal and economic assistance to disadvantaged youth in Baltimore.
In order to raise money for the children, Lewis hosts fans, supporters and area youth at various events, from barbeques and bowling to fitness clinics and paintball tournaments. Carnival Cruise Lines is a dedicated sponsor of the event and was kind enough to invite some of our staff to the bowling and paintball events. 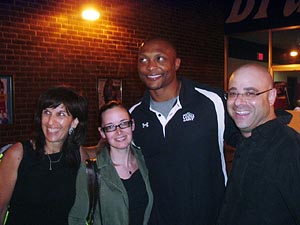 Consultants Adam Wolf, Janie Monier and Susan Eliasberg attended the celebrity bowling tournament where they got to play a few rounds. The consultants even got a chance to snap a few pictures with Lewis and former NFL star Eddie George. Janie and Adam were on the same team with Danny Wiseman, a professional bowler with more than 10 titles to his name.
“It was definitely a blast,” Adam said.  “He gave me some great tips.”
And Susan’s team wound up as the tournament champions.
The next day, consultants Daniel Yee, Doug Wasson, Lynda Lynn and Merry Keane, along with Yossi May from our client services department, got to play paintball. The event actually took place at Lewis’ home in Reisterstown, MD. 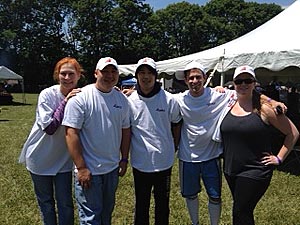 According to Yossi, Lewis’ lawn was set up with obstacles and teams took turns going up against each other. “There was no routine to it, just a lot of fun,” he said. Merry, who had never played paintball before, wound up being the champion of her team. “I was the last person out every round I played,” she said. “It was a ton of fun and I’m already planning to play again with a big group of friends.”
At both events, Ray Lewis was joined by Cam Newton, the quarterback for the Carolina Panthers and the first overall pick in the 2011 NFL Draft. NFL Films was also covering the event, so stay tuned to the NFL Network where you might get a glimpse of our consultants.
And we would be remiss if we didn’t send out a special thanks to both the Ray Lewis Family Foundation and Carnival Cruise Lines for allowing The Cruise Web to be a part of Ray’s Summer Days. It was truly a blast.