By Sherry Jefferson, Senior Cruise Consultant, The Cruise Web.
Last month I wrote about the advantages of small-ship cruising and this month, in a similar vein, I wanted to share my very recent (and very first) river cruise experience with Uniworld Boutique River Cruises.
I left on March 22nd to spend two days in Amsterdam prior to the March 25th sailing of the new SS Antoinette from Uniworld Boutique River Cruise Collection. The SS Antoinette is one of the new long ships and this was to be her first sailing of the season going from Amsterdam to Basel for the Castles Along the Rhine tour, but more about that later. 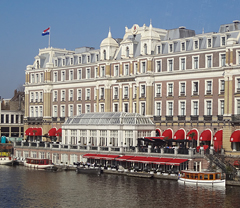 I arrived in Amsterdam to beautiful sunny mild weather and looked forward to seeing as much as possible in the two days there. I was fortunate to secure a ride to the pier which is about a 30 minutes from the airport and had the opportunity to tour the other river ships docked there. I then took a cab to the hotel and then set off to see the sites. Amsterdam is very lively and everyone rides bikes there. I’ve never seen so many bike riders anywhere, it was amazing. Women in skirts and heels, men in suits, moms with kids in seats – everyone rides bikes. I purchased a ticket for the hop-on-hop-off bus and rode it around the entire loop to get a good overview of the city and also added a canal boat tour. Seeing the city from the canals offered a whole different perspective. The nice thing about doing the hop-on-hop-off bus is that the ticket is good for 24 hours so if purchased later in the day you have practically the whole next day to use it again. The second day there we rode the bus again and got off at the Anne Frank House. That was the one place I was determined to see while in Amsterdam. Two days is really not enough time to see all of the wonderful things the city has to offer. There is a museum for everything and, while I would have loved to visit the Van Gogh Museum and the Heineken Experience, there just wasn’t enough time.

Sunday morning I took a cab to the pier to begin my new adventure. I was greeted right away by staff who came to meet the cab and take care of the bags. The check-in was quick; we got our room keys and were invited to have a light meal up at the casual dining venue on the sun deck. The environment on board was more like a boutique hotel, a totally different vibe than on a cruise ship. We were due to set sail later that afternoon so we spent the time looking around the ship and unpacking. Guests were arriving at different times all day and those that came in that morning were off touring. We set sail around 4pm and were heading out of the city when we had to pull over along the banks to pick up a late arrival. The same thing happened again further up river, but the nice thing about river cruising is that it’s easier to make these adjustments since you are never really that far from land. 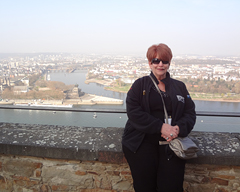 We cruised up river passing by many small towns and cities and the first stop was to be Cologne, Germany. The boat let us off at Zons and continued to Cologne while we were transported by motor coach. The city of Cologne was pretty much destroyed during the war but miraculously the gothic cathedral survived pretty much unscathed. It was quite a site seeing the spires of the cathedral emerge as we rounded a corner of the city. After touring we had time to spend on our own before meeting back at the ship in Cologne. The next stop was Koblenz where the Rhine meets the Moselle. We had a tour in the morning and then took a tram across the river up to Ehrenbreitstein Fortress, Europe’s second largest preserved fortress, built between 1817 and 1828 in its present-day design. We continued up river to Rudesheim where we were met by a mini-train near the pier to take us into the city. The narrow streets were filled with shops and restaurants and one of the highlights there was Siegfried’s Mechanical Music Cabinet, Rudesheim’s museum for mechanical musical instruments. 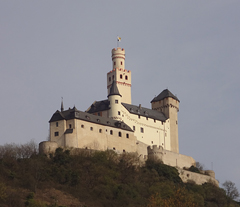 After spending some time in town we went on a wine tasting trip to Castle Vollrads where we got to sample various Rhine wines. Speyer Cathedral was next, another ancient cathedral from the 11th century that was once the center for Jewish scholarship in the medieval period. There still stands the most complete “mikvah” (ritual bath) in all of Europe.

One of the highlights of the trip was when we stopped in Kehl and were bussed into Strasbourg, the capital of the Alsace region of France. We were given a tour of the city by canal boat, passing beautiful modern buildings and the home of the Council of Europe on our way into Petit, Paris with its beautiful charming buildings and wonderful architecture. The next day we stopped in Breisach on the German side of the river and were taken by bus to Kayserberg, France, a small town between Riquewihr and Colmar. Kayserberg is known for being the birthplace of Albert Schweitzer. The old district has buildings still standing from the 13th century. This town looked like something out of a fairytale. 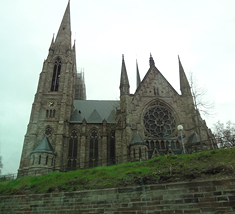 Atop one of the towers was a stork’s nest weighing over 1000 lbs. The storks migrate each year from Africa to Kayserberg and on the way out of town there was actually a stork in the nest. I loved this town. Riquewihr was next and this was very similar to Kayserberg, and then on to Colmar which is sort of a mini version of Strasbourg. The last stop was in Basel, Switzerland where the cruise ended and I stayed overnight. Basel is also quite nice and there was an optional extension that could have been added at the end of the cruise to spend three days in Lucerne which is about an hour from Basel. Maybe next time.

Tours were included each day with optional tours also available to purchase. The only optional tour I did was to Marksburg Castle, the only medieval castle to have not been destroyed. Other optional excursions were to Heidelberg and the Black Forest. I was later sorry to have not done them as those that went said it was well worth it. In all honesty, I was tired. There is a lot of walking, the streets are cobble-stoned and hilly and I am just not used to walking that much. Comfortable shoes with good support are a must. 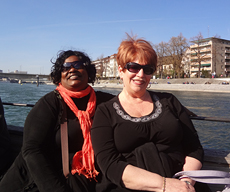 The ship itself was amazing. I loved having wine and beer included with lunch and dinner and while there isn’t food 24 hours a day, there was plenty of food. No one was ever hungry and there is a coffee machine available 24 hours a day where one could get coffee, cafe au lait, espresso, cappuccino, hot chocolate and assorted teas. The staff went out of their way to accommodate our needs and the whole environment was one of conviviality. Every one of my expectations were exceeded and I doubt I’ll ever forget this experience.

I really loved the whole experience and look forward to doing another river cruise in the not too distant future.