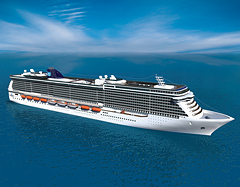 Norwegian Cruise Line has selected the winning names for its two new Freestyle Cruising® ships: Norwegian Breakaway, launching in April 2013, and Norwegian Getaway, launching in April 2014. The names were selected as the culmination of its “Norwegian’s Cruising for Names” contest held in conjunction with national newspaper USA Today.
Norwegian felt these names best reflected the innovation of the brand along with the freedom and 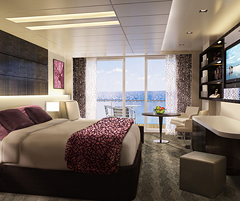 flexibility of the line’s signature Freestyle Cruising and invoked the feeling that these ships will provide a “break” at sea from the stress of everyday life. Breakaway is defined as “a departure or break from routine or tradition” and Getaway is defined as “a place where one escapes for relaxation, vacation, etc.”
“We felt Norwegian Breakaway and Norwegian Getaway epitomized both our Freestyle Cruising philosophy and our belief that these ships will offer a true respite, whisking our guests away from their everyday routines and delivering the ultimate cruise vacation,” said Kevin Sheehan, Norwegian’s chief executive officer
The contest winners are Kimberly Powell of Lafayette, Louisiana, who first submitted Norwegian Breakaway, and Dennis Hultman of Vienna, Virginia, 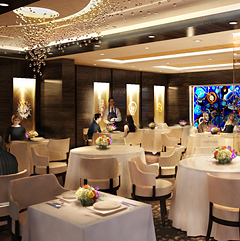 who first submitted Norwegian Getaway. Powell took her first cruise in August on Norwegian Spirit and loved the experience. She is a self-proclaimed “news junkie” and thought it would be fun to enter the contest when she saw it on USA Today’s site. Hultman is an avid cruiser and also reads USA Today daily.
Both Powell and Hultman will receive a trip for two to Norwegian Breakaway’s inaugural festivities, including the Christening Ceremony (date/location yet to be determined). The trip includes round-trip coach airfare for two, ground transportation, balcony stateroom accommodations (double occupancy), on-board meals, as well as government taxes and fees. The contest entry period ran from July 18 to August 14, 2011, during which 230,000 entries were received.
The Breakaway class ships will each be 144,017 gross tons and will have approximately 4,000 passenger berths. These ships represent an opportunity for the Norwegian guest to “break away” from the routine of work, school, and daily stress, and find a true respite at sea. These

new ships will take the best of the best from all of Norwegian’s existing ships drawing on the line’s experience of having launched 10 ships in the past 10 years starting with Norwegian Star and Sun in 2001 and culminating with the launch of Norwegian Epic in 2010. To date, the company has revealed all of the ships’ staterooms, which include the innovative Studios, designed and priced for solo travelers, along with The Haven by Norwegian, comprised of 42 suites at the top of the ship.