Courtesy of Cunard Line.
Danish-born Inger Olsen made history on 1 December 2010 by becoming Cunard Line’s first female Captain in its 171-year history of sailing luxury cruise vacations. Yesterday, she continued her historic maiden sailings as Captain of Queen Victoria, as she brought the ship back to the Port of Los Angeles.
Captain Olsen and Queen Victoria are coming off the heels of the momentous Cunard Royal Rendezvous in New York City on 13 January, where all three of Cunard’s Queens met for a 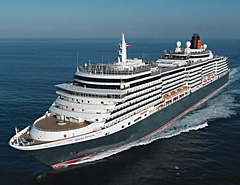 spectacular fireworks display in front of the Statue of Liberty before departing on their respective voyages. Olsen joined Queen Victoria just prior to the commencement of the ship’s debut Americas season, departing from New York and sailing to Los Angeles. During this first 17-day voyage, the ship called on Ft. Lauderdale and Bonaire, traversed the Panama Canal, and visited three ports in Mexico – Huatulco, Acapulco and Manzanillo – before arriving into Los Angeles yesterday.
Queen Victoria’s Americas season continues until 18 March, and features additional transits through the Panama Canal, four total calls to Los Angeles, two roundtrip voyages from Los Angeles to Hawaii, and one Getaway voyage to Mexico.
Forty-three-year-old Captain Olsen was raised in the Faroe Islands, which accounts for her maritime abilities, and she

joined Cunard in 1997 as First Officer on board Caronia. In 2001 she transferred to sister-brand Seabourn. She sailed on Seabourn Sun and Seabourn Spirit before being promoted to the rank of Staff Captain on Seabourn Pride in 2003.
Following some years with other companies within the Carnival Corporation family, Captain Olsen returned to Cunard in August this year as Deputy Captain of Queen Victoria. When not at the helm of the majestic Cunard ocean liner, Captain Olsen lives in Denmark.