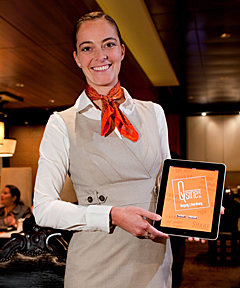 The rules say you shouldn’t play with your food. But it’s quite the contrary in “Qsine,” the novel restaurant introduced on Celebrity Cruises’ stylish Celebrity Eclipse last year. The award-winning venue – the first at sea to present its menu and wine list on an iPadTM – has met with such phenomenal response that Celebrity plans to add it to Celebrity Infinity during the ship’s revitalization, designed to complement the already award-winning Millennium Class ships’ style and design with some of the most popular venues on the line’s widely heralded Solstice Class ships.

“Qsine is designed to bring out our guests’ ‘inner foodie’ through a uniquely unordinary approach, elevating the dining experience to a performance art,” said Celebrity’s Vice President of Culinary Operations Jacques Van Staden. “We’ve been absolutely thrilled with the response to Qsine from our guests on Celebrity Eclipse, and look forward to offering the same engaging experience when Celebrity Infinity presents the venue later this year.”

Van Staden says the only serious thing in Qsine is the food, such as a vertical selection of savory tapas and mezze served individually in custom-made frames, a trio of chilled soups delivered shot-style, and spring rolls served in springs, all of which are described in detail on the iPad-housed menu and wine list, which offers a full scan of wine labels, an interactive cocktail menu, and the ability for guests to enter tasting notes and e-mail their favorite wine selections.

As on Celebrity Constellation, the following venues also will be incorporated on Celebrity Infinity during the ship’s scheduled drydock period:

“Everything we’ve introduced on our award-winning Solstice Class fleet, and everything we’re adding to our popular Millennium Class ships, has been created to enhance that all-important feeling of getting away,” said Celebrity’s President & CEO Dan Hanrahan. “All of our new venues and onboard experiences – paired with the spectacular service of our dedicated crew – are designed to ensure our guests can make the most of their precious vacation time.”
Celebrity currently plans to similarly refurbish Celebrity Summit in January 2012, followed by Celebrity Millennium in April 2012. The already-revitalized Celebrity Constellation will be further refitted with the additional offerings in April 2013.