By: The Cruise Web, Inc.

Several lucky Cruise Web employees recently experienced the brand new Allure of the Seas during the ship’s inaugural out of Ft. Lauderdale, Florida. Upon their return, we asked them to share their impressions of the new ship with highlights from their cruises:

Sherry J.
Despite her size, you never get the feeling of being on such a large vessel. There are many quiet tucked away areas, and the overall design has you feeling you are on a smaller ship. There is something for

everyone regardless of age. This is the perfect venue for family reunions, groups of friends, or parents with young children. From the city feel of Central Park to the beach feel of The Boardwalk, if you can imagine it, you will probably find it on the ship. There’s the H20 Zone for kids, miniature golf, rock climbing walls, zip lines – it goes on and on. The Allure is a floating resort; the fact that she makes some port stops is just icing on the cake. I can’t wait to experience all she offers for more than just two days.
Priscilla A. 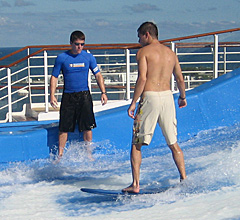 Think you’ve seen it all, done it all? I have a feeling this ship will show you otherwise. On the Allure of the Seas, you can learn how to ride the waves on The FlowRider – the ultimate surf machine that’s great for all levels of surf experience. Let ‘er rip and show off some skills standing up (flowboarding) or lying down (bodyboarding). If you prefer to stay dry, enjoy the ship’s best view of The Boardwalk by flying over it on the Zip Line. You’ll find these fun-filled activities, including the Rock Climbing wall, at the Sports Court on the ship.
Jen C.
It was a pleasure to be invited to experience the brand new Allure of the Seas over Thanksgiving weekend. The ship has several new amenities that I really enjoyed. The first is the Aqua Theatre – especially the show “Oceanaria,” which we were able to preview. I was amazed by the talent and 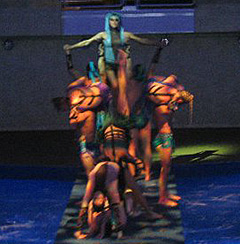 skill of the high divers and performers; you would never guess you were on a moving ship! I also greatly enjoyed a wonderful dinner at Giovanni’s Table, which is a family-style Italian restaurant. Between the quality of the food and the ambiance, it feels like you are in Italy, not sailing the Caribbean. Wandering through Central Park, you are surrounded by live plants, trees, and flowers, as well as the ever present sound of chirping crickets (one of the few things that are not actually on the ship). This ship is a destination in and of itself. I could spend 7-nights on board and never see the entire thing – though I tried to do it in 2-nights… gee, I’m tired.
Seth W.

Considering the enormous scale of the ship, I was very impressed with how easy it was to navigate on board the Allure. Major attractions were conveniently located and touch-screen monitors made finding new areas easy and fun. As for my personal highlight (aside from walking past Katie Holmes), I thought the Allure of the Sea‘s Promenade Parade was surprisingly entertaining. The parade began with popular DreamWorks characters marching through the central Promenade, and eventually turned into an all out disco dance party. I was fortunate enough to watch the finale of the parade from the Rising Tide, a bar that moves up and down between three levels of the ship.
Warren T.
Kids & even adults will love how Allure of Seas incorporates Dreamworks characters into ship-wide events such as the Mardi-Gras-style parade 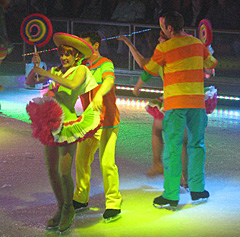 through the Royal Promenade featuring costumed characters from Shrek and Madagascar. The ice show theme is from Dreamworks’ How to Train Your Dragon. But I was most impressed with Allure‘s Chicago production. As with Hairspray on Oasis of Seas, this sets a new standard for cruise ship entertainment. I have seen one too many “Salute to Broadway” cruise ship shows with no defining theme. Having one show, executed with real Broadway-touring show talent, is worthy of a standing ovation.

NOTE: The Cruise Web, Inc. received complimentary inaugural staterooms from Royal Caribbean, which in turn were offered to the employees listed above. The views and opinions expressed herein are those of the contributors, and do not necessarily reflect the position of The Cruise Web or Royal Caribbean.