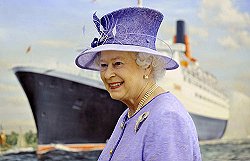 Cunard Line is pleased to announce that Her Majesty The Queen will name the company’s new Queen Elizabeth, the third Cunard ship to bear the name, at a ceremony in Southampton, England on Monday, 11 October 2010.
The naming is a milestone in British maritime history and is a major event of worldwide interest.
“The naming of a Cunard Queen is a very special occasion and this will be an historic event in the true sense of the word,” said Peter Shanks, president of Cunard Line. “The Queen launched Cunard’s Queen Elizabeth 2 in 1967 and named our current flagship, Queen Mary 2, in 2004. We are both honoured and proud that Her Majesty will name our new liner, Queen Elizabeth,” added Shanks. 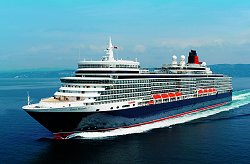 Her Majesty was also present at the age of 12 at the launch of the first Queen Elizabeth on 27 September 1938 when she accompanied her mother, Queen Elizabeth, to Clydebank for the launch.
The Naming Ceremony will take place in Southampton on Monday, 11 October and Queen Elizabeth will set sail on her Maiden Voyage the following day.
Other historic namings of Cunard ships by British royalty over the Line’s 170-year history include the following:
• Her Majesty The Queen, as Princess Elizabeth, launched Caronia, the ‘Green Goddess,’ in 1947. 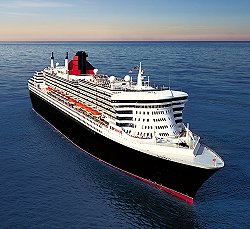 • Her Majesty Queen Mary, wife of King George V, launched Queen Mary in 1934 – and in so doing became the first British Monarch ever to launch a merchant ship. His Majesty King George V accompanied his wife.
• The late Queen Mother, as Her Majesty Queen Elizabeth, launched Queen Elizabeth in 1938. Princess Elizabeth and Princess Margaret accompanied their mother.
• HRH The Princess Margaret launched Carinthia in 1955.
• HRH The Duchess of Cornwall named Queen Victoria in Southampton in December 2007. HRH The Prince of Wales was also in attendance.