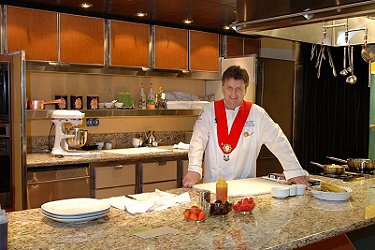 Taking top chefs from kitchens and restaurants all around the world and inviting them aboard Holland America Line ships, the line’s Culinary Arts Center, presented by Food & Wine Magazine, continues to expand in popularity. This year, more than 65 guest culinary experts are participating in the hugely successful program. Culinary notables this season include Bravo-TV’s “Top Chef” contender, Nikki Cascone; Mark Bittman, food columnist for The New York Times and award-winning cookbook author; and Keith Coburn, television personality of the hit series, “Deadliest Catch.”
“Because the Culinary Arts Center is such a hit, we will continue to expand the program and provide our guests with the enriching culinary experiences that have made it so successful,” said Richard D. Meadows, CTC, executive vice president, marketing, sales and guest programs. “For those who love to cook and cruise, there is no more enjoyable vacation experience than taking over a fully stocked and equipped professional kitchen with an expert chef as guide.”
Holland America Line’s award-winning celebrity chefs and experts in the 2010 season include:

In addition to partnering with Food & Wine to secure top experts, Holland America Line showcases its own culinary stars on more than 500 annual cruises. The line’s two cookbooks, “A Taste of Excellence” and “A Taste of Elegance,” written by Master Chef Rudi Sodamin, offer guests preparation techniques for some of Holland America’s most delectable dishes and lavish libations as part of the Culinary Arts Center experience.
The line’s complimentary demonstration classes by award-winning chefs are only one element of the extensive culinary enrichment program. As part of Holland America’s burgeoning enrichment activities, the program also features one-hour food-and-mixology demonstrations, wine tasting and party-planning sessions, ice carving and floral arranging workshops and hands-on cooking classes for kids. A new feature in the line’s culinary program is Dine with the Chef held in the Culinary Arts Center. A combination of a cooking demonstration and a fine-dining experience, guests sit at elegantly set tables and interact with the chef as he or she prepares a five-course dinner in which each served course is paired with an appropriate wine. 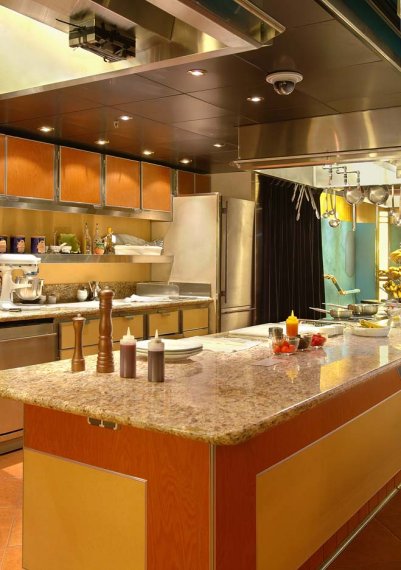 A permanently installed, state-of-the-art “show kitchen at sea,” the Culinary Arts Centers resemble the elaborate show kitchens used by celebrity chefs on television cooking programs. Each facility features a theater-style venue, with two large video screens to display overhead and close-up video views of food preparation, and a large cooking display counter where guests can learn from the masters. Culinary demonstrations are also filmed and aired on in-stateroom televisions. Holland America Line invested nearly $1 million per ship to create and install the Culinary Arts Center facilities. This investment is part of the company’s Signature of Excellence initiative which has invested more than $525 million to date in fleet-wide product and service enhancements.